Streamline your crystal harvesting with this collection of tips

How you handle and mount your crystals has a large impact on the quality of the data you can obtain from them. Our new Harvesting Tips poster lays out simple techniques to efficiently harvest all kinds of crystals. It features a clean design, plain language, and visual examples that even undergraduates can understand.

The CIMP method combines the advantages of vapor–diffusion method with batch meso phase crystallization. For more information, see “Controlled In Meso Phase Crystallization – A Method for the Structural Investigation of Membrane Proteins” Interested in learning more about what HarkerBIO can do for your lab?

A tool developed at the Lawrence Berkely National Lab to monitor X–ray beam intensity in real–time will be brought to market by MiTeGen.

The technology was developed by Diane Bryant and Simon Morton at the Berkeley Center for Structural Biology at Berkeley Lab. It will allow for optimized experiments for studying the structure of proteins.

“The work done by the team at Lawrence Berkeley National Lab has resulted in a great tool for monitoring X–ray diffraction experiments. The diode beam stop device will enable researchers to obtain real–time information about the intensity of the X–rays hitting their samples. We here at MiTeGen are very excited to bring this enabling technology to the marketplace and help push research forward.”

Cause of weak TB drugs revealed through structural imaging of interaction 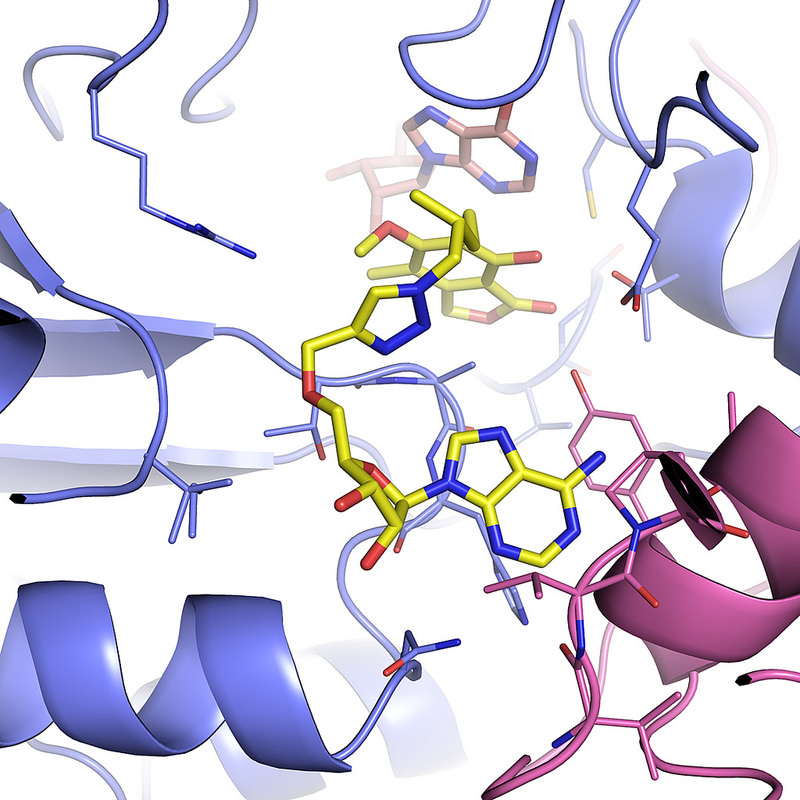 Researchers at Johns Hopkins University have utilized X–ray crystallography to determine the nature of the interaction between an enzyme in turbuculosis and a family of drugs called fluoroquinolones that target the enzyme. The findings suggest possibilities for developing new version of fluoroquinolones in the struggle against mult-drug resistant TB.

Moxifloxacin (green) interacts with the enzyme gyrase (blues and pinks) and broken DNA (orange and yellow) of the bacterium that causes TB. Credit: Tim Blower

X–ray crystallography was used to determine inadvertant interaction between modified T–cells and healthy heart tissue rather than cancer tissue.

To help make certain you have all of the tools needed to maintain a successful crystallography lab, we have continued to expand our offerings. From crystallization plates to pucks, we have what you need for your lab. Below are a couple of the areas where we’ve made additions. If you have solved a structure using MiTeGen products and would like to be featured in our newsletter, drop us a line!